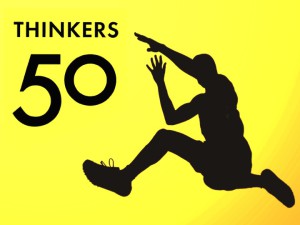 Thinkers50, the global platform for management thinking, today announces a groundbreaking new partnership with the city of Odense in Denmark.  Thinkers50 Europe will be based in the city, the third biggest in Denmark, and play an important role in Odense’s transformation into a knowledge hub.

“Odense is committed to building its future around knowledge and that really resonated with the objectives of the Thinkers50.  We believe in the power of ideas to make the world a better place. We look forward to bringing some of the best ideas in the business world to Odense and also taking some of the most exciting innovations, leaders, thinkers and entrepreneurs in Odense to the world,” says Thinkers50 cofounder Des Dearlove.

Anker Boye, the Mayor of Odense, heralds the launch of Thinkers50 Europe as a major step forward in the city’s development. “We are building a city for the future. We are delighted to welcome the world’s business leaders to Odense, to share the best ideas that will allow local and global businesses to innovate and grow.”

Thinkers50 Europe will bring some of the world’s leading business thinkers to Odense with regular events.  It will also serve as a center for the development of new business insights.  Thinkers50 research will look at best practice within the Odense region, one of the world’s foremost clusters of knowledge in the field of robotics.

Thinkers50 Europe is a long-term commitment from the city of Odense and represents the first partnership of its kind for the city and Thinkers50.  “In the same way as Davos has become a meeting place for world leaders, we would like to imagine Odense could do the same for business thinkers and business leaders. We see it as a potential gamechanger for the city and for Thinkers50,” says leading business author Peter Fisk who has helped the city to develop a new strategy. 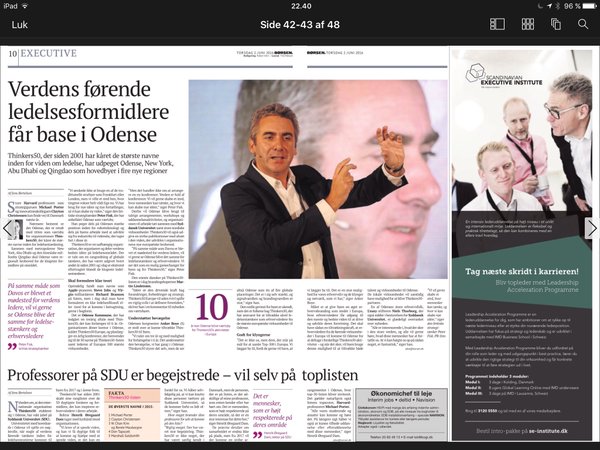 With a population of 190,000 Odense is situated at the heart of Denmark.  The city has a long tradition at being at the forefront of ideas.  An English Benedictine monk, Aelnoth, based at the city’s St. Knud’s Monastery wrote Denmark’s first literary work in 1100 and, in 1482, a German printer, Johan Snell, printed the first two books in Denmark at the invitation of Odense’s clergy. The city is still best known as the birthplace of Hans Christian Andersen.

Today, the University of Southern Denmark, the broadcaster TV2, and more than 80 innovative companies in the robotic, component, integration and automation sectors are based in Odense, now the world’s third largest hub in the robotics industry. Over the next 10 to 15 years, it is planned that investments totaling 3.2 billion euros will transform Odense into an internationally renowned city of knowledge.

What the world’s business gurus say

Some of the leading business thinkers in the world have commented on the launch of Thinkers50 Europe:

“A city which champions the latest management ideas is unique and groundbreaking. Thinkers50 Europe might well re-invent how we create and access business knowledge.”

“This is exciting. Ideas need to be at the top of the business agenda.  Thinkers50 Europe can help achieve just that.”

Don Tapscott, CEO, The Tapscott Group Inc.; Fellow, Martin Prosperity Institute; and co-author of Blockchain Revolution: How The Technology Behind Bitcoin Is Changing Money, Business And The World.

“At a time when a decent lifestyle seems beyond the aspirations of many, the Danish city of Odense is having none of it.  With long-term thinking, integrated plans for infrastructure and development and long-term leadership, Odense has made quality of life the centerpiece of its development philosophy.  Next up, a move to becoming a hub for innovation, which is already paying off in its leading position in the robotics industry – just in time for the Internet of Things.  Keep an eye on developments from this surprising, intriguing place.”

“Ideas are the driving force of change, improvement and strategy. Thinkers50 Europe will without any doubt play an important role in how to shape what will come to define the future.”

“Odense, Denmark. Haven’t heard of it? You will. With Thinkers50 Europe now headquartered there, it’s about to become the Davos of business ideas.”

Whitney Johnson, author of Disrupt Yourself.

“What Got You Here Won’t Get You There is not only a book title and a concept that applies to leaders, it also applies to cities, nations and regions.  Odense is, in many ways, creating the city of the future.  It is in the process of transforming from a great city today into an even greater city tomorrow.  A dynamic future depends upon the flow of creative, new ideas.  Thinkers50 Europe will be a source of thought leadership that can help shape the future of the city and the region.  I believe that Thinkers50 Europe will be a huge success.  I am looking forward to being both a contributor and learner in this exciting process.”

Marshall Goldsmith, author of What Got You Here Won’t Get You There, winner of the Thinkers50 Leadership award 2015.