The human and economic impacts of COVID-19 … What should business leaders do now, to support people and society, whilst also sustaining their businesses?

It’s a difficult time. All around us, the news updates on television screens and social media are relentless as COVID-19 multiplies across our cities, nations and continents. The human tragedy, concern for our loved ones, frustration at politicians, admiration for health workers, disbelief at those still socialising, adaptation to new routines under quarantine or lockdown, affects us all. As a society there is a huge concern for each other, whilst as business leaders we know we have to keep our businesses going too.

In years to come we will look back, sociologists and economists, at the way in which we behaved, and the positive and negative impacts it had. Questions will rage about the causes and effects. From the impact of climate change and urbanisation that likely sparked the leap of the virus from animal to human, the global connectedness of travellers that accelerated the contagion’s spread, to the panic buying of some, and the total lack of social responsibility of others.

Of course, Bill Gates was right when in his 2015 TED Talk, he argued that the biggest threat to humanity was not economic or conflict, but a global pandemic for which we were woefully unprepared.

The impact on every business has obviously been significant. The travel and hospitality industry was perhaps the first and most dramatically affected. As travel bookings were cancelled, airline share prices plunged (United -57%) as did hotels (Marriott -48%) and booking engines (Expedia 53%). Worst were the cruise lines, with the sight of quarantined ships around the world (Carnival -68%).

In the medical world, scientists are racing to find a vaccine. As they seek to accelerate their research and development, human trials have already started on possible solutions, but it is still 12-18 months away. Incredible, considering previous vaccines took 20 years. Other anti-viral drugs may help patients to recover faster, like Avigan developed by Fujifilm, the former maker of camera film, in 2014. 3M is racing to manufacture millions of new hospital ventilators, whilst Dyson has used its air purifier technology to develop CoVent, a new ventilator in just 10 days, and is now racing to produce 20,000 of their new design.

And other companies have jumped in with support. LVMH quickly converted production of perfumes to hand sanitiser, although it didn’t come with a Louis Vuitton label. Maverick beer brand Brewdog meanwhile developed its own branded santitizer, Brewgel. Both companies gave all stocks free to people in most need. At the same time, Foxxcon transformed its iPhone production into making hi-tech face masks, and Spanish fashion business Inditex shifted to producing protective clothing for health workers.

So how do commentators see the business impacts around the world?

BCG analysis of consumer behaviours shows an interesting comparison between Seattle (where COVID-19 first struck in the USA) and the national average. It shows huge drop in transportation and fitness as people stayed at home, but significant increases in groceries, both online and physical, pharmacy and entertainment. 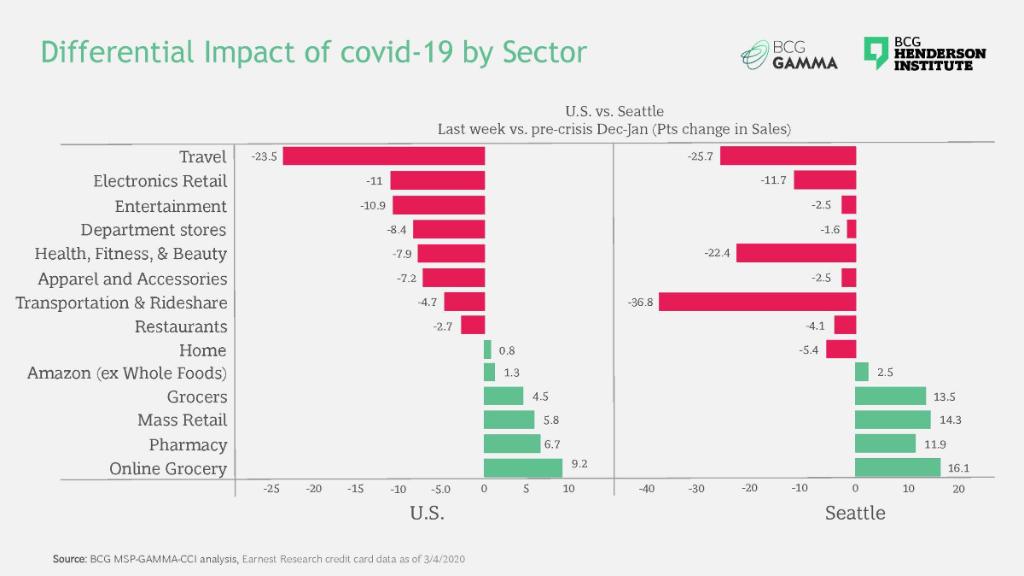 Home delivery services may be a significant “beneficiaries” of our behaviour changes, both during the crisis, and beyond it too

Indeed this shift online is likely to be the most significant business legacy of COVID-19. The shift to home shopping and food deliveries is one example, but even more significant for millions of students is the shift to online education as schools and universities seek to move teaching and assessments online, and in healthcare where much faster and safer advice and diagnostics can be delivered by smartphone consultations and online AI-enhanced analytics.

Stock markets around the world have seen substantial declines, with most indexes down by 25-35%. USA and European markets were relatively late to appreciate the severity of the coronavirus. Some stocks actually increased in value throughout early February even as the virus was spreading far beyond China, showing how many in the west acted in denial or underestimated the virus impact: 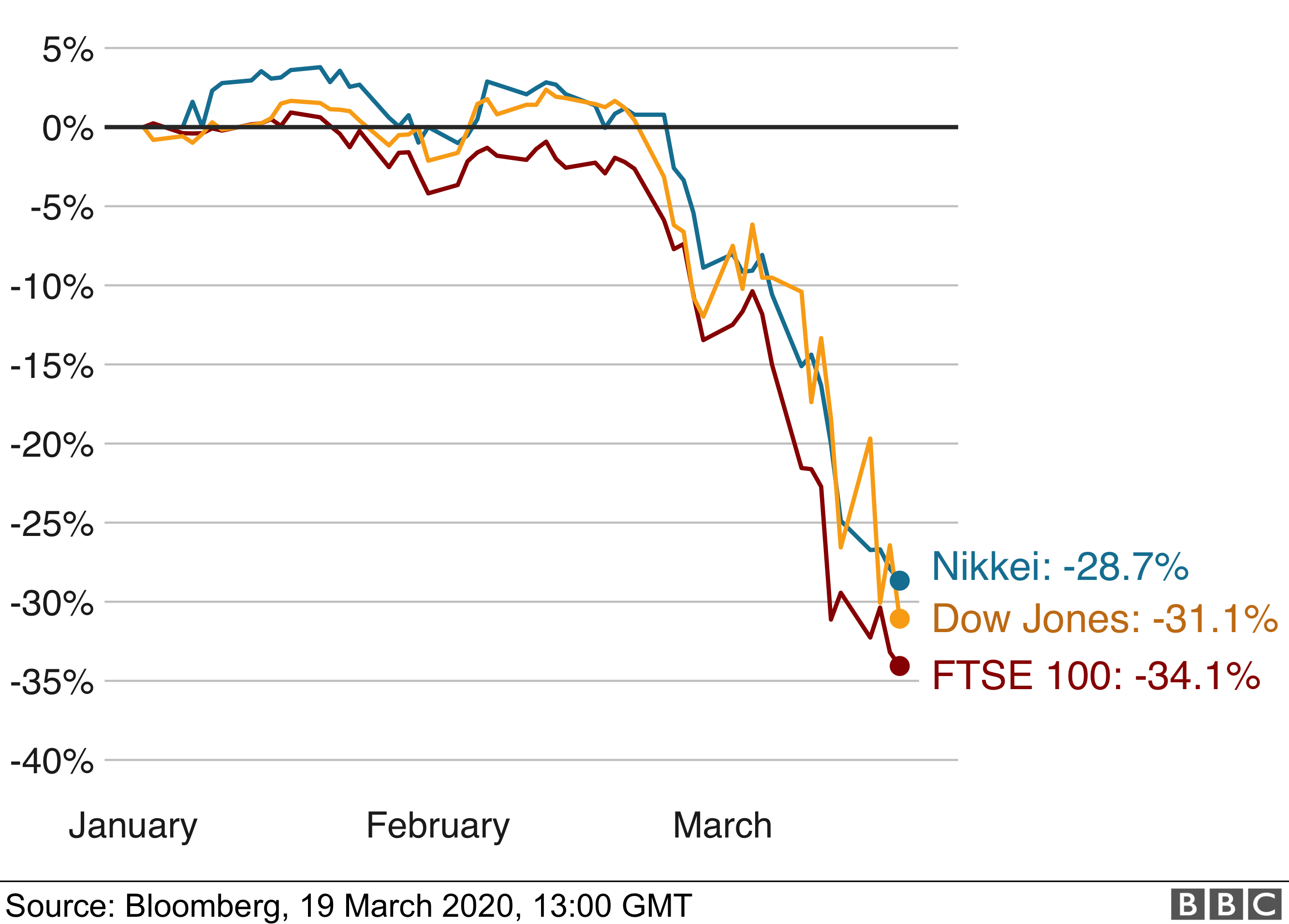 The consequences for many companies will be quickly felt. Particularly for those where their entire revenue streams is abruptly halted, like airlines and car manufacturers, realtors and restaurants, but also for small businesses and gig workers, and those who depend on them. For so many of these companies, margins are slim, and there is no ability to keep paying salaries. Some companies however are doing what they can

Whilst China received initial criticism for not stopping the initial outbreak of the virus in its tracks, back in January in Wuhan, its subsequent actions seem to have been effective in slowly the spread to the point where business is starting to get back to normal. China’s action included extreme quarantine for anyone with symptoms, tracked through citizens needing to update their daily temperature readings through a government app. Also noticeable was the massive change in air pollution, as the grey smog across industrialised China dissipated for 6 weeks. Now, however, the roads of Beijing are clogged again, and China’s economy is recovering as shown by BCG data: 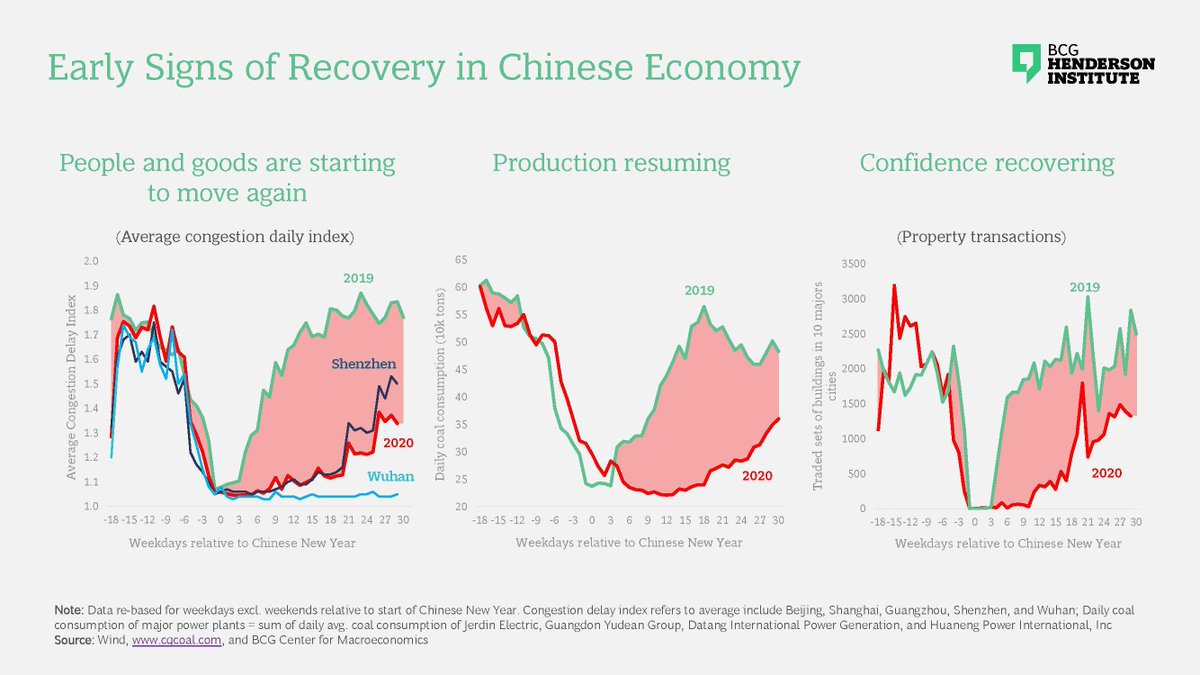 McKinsey has brought together a useful checklist of what business leaders should be doing right now. Based on analysis of what companies are effectively doing they propose 5 focus areas, with 18 workstreams of action: 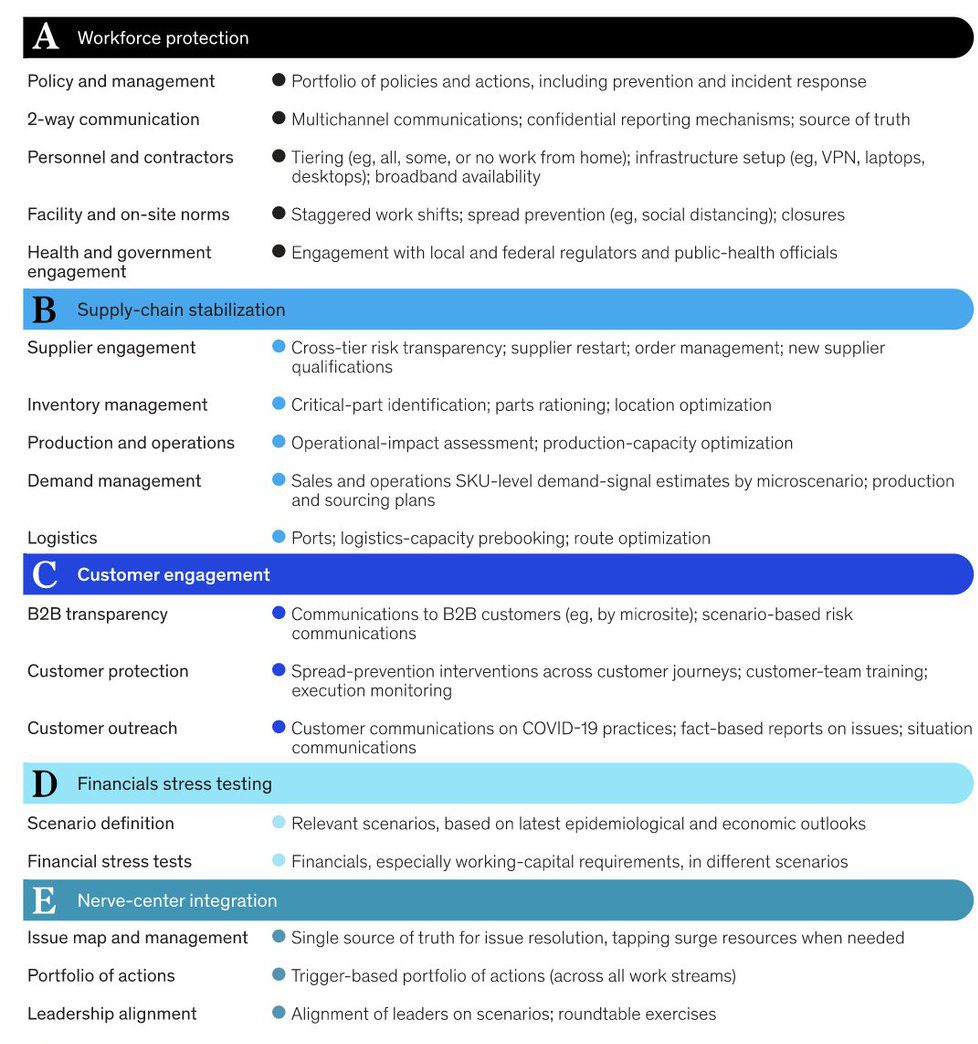 However every business needs to tread a fine line, between putting people first and profits second. Last week a Wall Street Journal editorial suggested that we may soon face a dilemma, a terrible choice to either severely damage our livelihoods through extended lockdowns, or to sacrifice the lives of thousands, if not millions, to a fast-spreading virus.  If businesses are hugely damaged and many jobs are lost, this could have a great human impact than death. I don’t think that’s a reasonable choice.

McKinsey, instead, have focused on safeguarding lives and livelihoods. 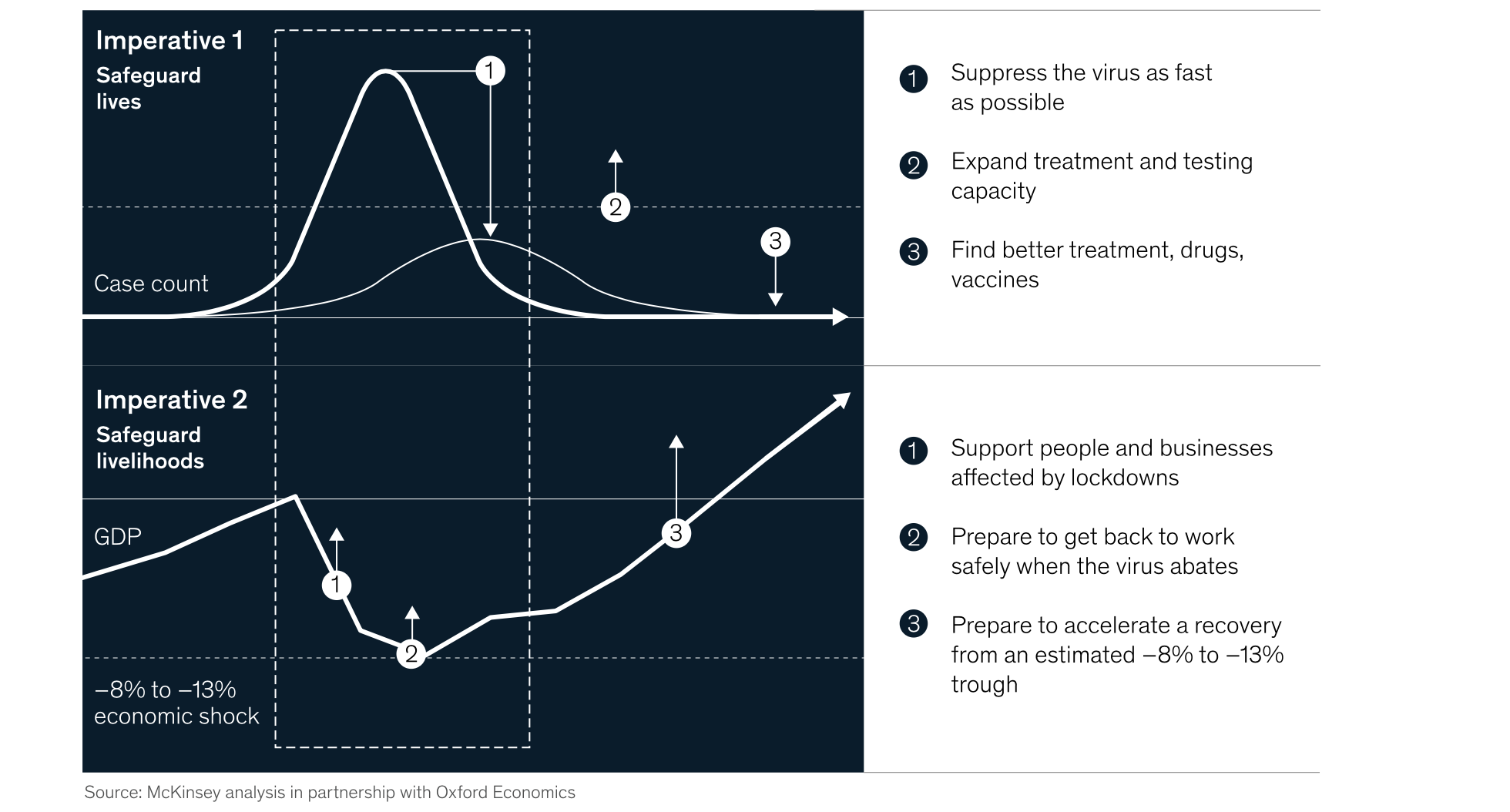 The most positive forecast by McKinsey is that China will undergo a sharp but brief slowdown and relatively quickly rebound to pre-crisis levels of activity. While GDP is expected to drop sharply in Q2 2020, some signs of normal life are returning in Beijing, Shanghai, and most major cities outside Hubei. In this scenario, China’s annual GDP growth for 2020 would end up roughly flat, wiping out the growth of 6 percent we expected just three months ago. Nevertheless, by 2021, China’s economy would be on the way to regaining its pre-crisis trajectory, if not adversely affected by developments in the rest of the world.

In this scenario, the virus in Europe and the United States would be controlled effectively with between two to three months of economic shutdown. Monetary and fiscal policy would mitigate some of the economic damage with some delays in transmission, so that a strong rebound could begin after the virus was contained at the end of Q2 2020.

In a more pessimistic scenario, China would recover more slowly and would perhaps need to clamp down on regional resurgences of the virus. It would also be hurt by falling exports to the rest of the world. Its economy could face a potentially unprecedented contraction.

The US and Europe could also face more dire outcomes in this scenario. They could fail to contain the virus within one quarter and be forced to implement some form of physical distancing and quarantines throughout the summer. This could end up producing a decline in GDP at an annualized pace of 35 to 40 percent in Q2, with major economies in Europe registering similar performance. Economic policy would fail to prevent a huge spike in unemployment and business closures, creating a far slower recovery even after the virus is contained. In this darker scenario, it could take more than two years before GDP recovers to its pre-virus level, placing both Europe and the United States.

Finding your North Star to survive and thrive

As business turns to the challenge of survival and renewal, beyond the current economic shocks, to get through what is likely to be a significant global downturn, probably a recession. There are big challenges, but also opportunities:

Being set adrift in a stormy sea means that all the strategies  and plans you did have are thrown away. Instead you need something to keep guiding you. Something to give you direction, and maybe a little hope. Something to frame what you could do, not just what you did do. Purpose is your North Star: