These are familiar words.

“Disruption” has become synonymous with innovation, and particularly the impact of start-ups on traditional markets, and large corporations. From the definition of Clay Christensen which was more about disruptive technologies, and how a seemingly inferior technology can ultimately beat a superior technology, because it is good enough, to the simplicity of advertising guru Jean Marie Dru who said disruption is about upsetting the status quo.

“Pivot” became a cool word in Silicon Valley, as tech start-ups realised that they needed to change direction in order to succeed. Facebook pivoted from Facemash dating site to social network, Instagram pivoted from Burbn meet-up site to photo sharing and messaging. But of course long before that Western Union pivoted from telegrams to money transfer, Shell from retailing to energy. It means transformation, and typically with a new direction.

So when another book comes along saying “Disruption by digital technologies? That’s not a new story. But what is new is the “wise pivot,” a replicable strategy for harnessing disruption to survive, grow, and be relevant to the future. It’s a strategy for perpetual reinvention across the old, now, and new elements of any business” it still doesn’t sound like anything new. But this is a book is good because most businesses still focus on the past, not the future. They need a dramatic shift.

As I say in almost every article I write, the future should be the obsession of every business, and particularly its leaders. Making sense of it. Exploring it. Creating it. Preparing for it. Making it happen. Investors, of course, are all about the future potential of a company, and quantify it in market values. But it still seems smart to say let’s just focus on today. Mindfulness is one thing, and delivery certainly matters, but the future matters most.

Pivot to the future

The new book “Pivot to the Future: Discovering Value and Creating Growth in a Disrupted World” argues that the emergence of a new wave of technologies — including artificial intelligence, virtual and augmented reality, 5G and quantum computing — requires businesses to continuously reinvent themselves using new management and capital-allocation strategies.

The book is written by three Accenture executives and makes the case that successful innovation is a long-term game that requires constant pivots to evolve and change. They call it the “wise pivot” —repeated renewal and reinvention through a series of strategic shifts, where innovation is applied equally in old, current and emerging businesses. They call on leaders to fight the urge to prematurely abandon legacy businesses and to nurture rather than simply exploit today’s “cash cows.” With the additional value they uncover, companies can fuel their future by embracing the start-up mentality of scaling rapidly as new technologies and markets appear, often suddenly.

They also tell the story of Accenture’s own wise pivot, in which the company nearly doubled its market capitalization in five years to more than US$100 billion. Recognizing that professional services and outsourcing were on course to commoditization, in the early 2010s Accenture invested heavily in five then-up-and-coming digital capabilities — interactive, mobile, analytics, cloud and cybersecurity — with the potential to deliver major benefits to clients and high growth to the company.

Here are the book’s key themes:

Rotating to the new requires strong and continual action. It is not a transformation with a set end date; rather, it’s a continual process of getting better through the twin initiatives of core transformation and innovation. There are four key phases to help businesses rotate to the new: 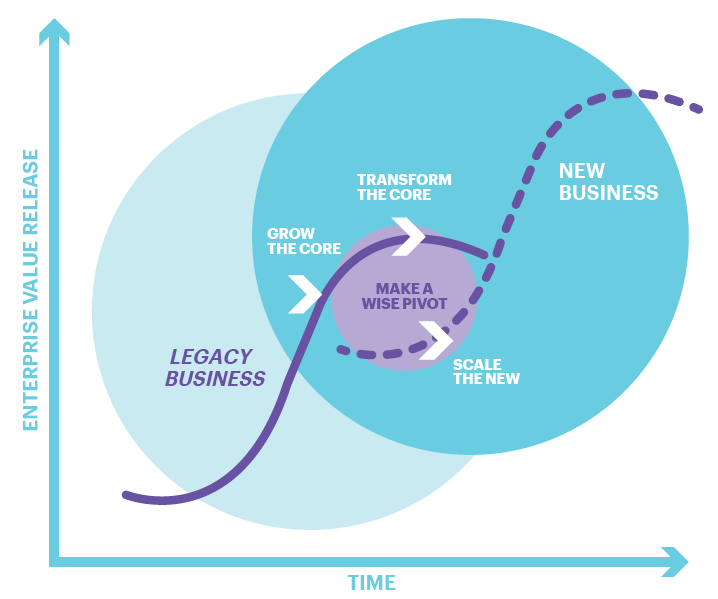 In other words, rotating to the new is about nesting two S-curves, and then shifting from one to the other. Businesses today are sitting on the lower, established S-curve. They must start looking at the bottom of the new S-curve with technologies like automation, AI, big data and analytics, and to look at opportunities to engage customers outside the business transaction. The wise pivot is not easy—but done properly, can help insurers not just fend off disruption, but become an agile, innovative organisation that can compete for the long term.