Hit Refresh … How Microsoft’s “growth mindset” enabled it to become the world’s most valuable company, again. 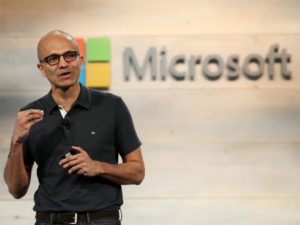 Since taking charge he has turned the company’s fortunes around, tripling its market value, making it the most valuable company in the world for the first time since 2002. In November 2018, Microsoft once again had the highest market capitalisation on the planet, and has tussled with Amazon for the lead ever since.

Over the last 9 months I’ve been working closely with Microsoft.

My challenge was to help them to be “Gamechangers“, using the concepts and methodologies of my recent book by the same name. In fact it isn’t really about Microsoft, it is about their business customers. Its about how Microsoft, through the power of its fabulous technologies like AI and cloud – products like Azure and Hololens, and the services that bring them to life – can enable their customers to “change the game” – to transform the world’s of aviation or automobiles, finance or fashion.

“We don’t want to be the cool company in the tech sector,” Nadella says “We want to be the company that makes other people cool.” By which he means, the mission is to build Microsoft as the enabling force behind today’s business world. Whilst his predecessors burnt their fingers trying to create branded hardware, most notably acquiring Nokia’s mobile business, Nadella is happier to create the smart insides of  other people’s solutions.

To be the partner, the enabler, to empower others to be great.

An early morning 10km run around the huge Microsoft Campus in Redmond was more like a history tour, spotting Bill Gates’ old office, and many more almost-historic sites. But go inside the building and work with its people, and there is a very different vibe.

This is Satya Nadella’s tribe. Witness the number of cricket pitches around the campus, a game which he loves. And the many pop-up “hackathons” too. Since becoming CEO almost three years ago, he has certainly “Hit Refresh“, as his book is entitled.

But this is not a cult of leadership, or a hierarchy of command. Nadella is a very modern leader, recognising that his role is not to be the expert, the hero, the decision-maker – but to be the facilitator, the connector, the enabler. Behind that behaviour is a powerful use of the “Growth Mindset” concept. Nowhere will you find this approach to leadership more clear, applied and powerful as in today’s Microsoft.

“Growth mindset” is a simple but incredibly powerful concept. I use it constantly in my work with business leaders around the world. One of the biggest problems companies run into, and the successful ones even more so, is that they keep trying to perfect their existing world. Instead, it’s probably time to let go. As the world changes, ever more dramatically, maybe you should too. Look forwards not back, experiment with new ideas, rather than seek to optimise the old. Efficiency savings won’t create your future, but ideas and imagination just might. Move from diminishing returns to exponential opportunities.

“Don’t be a know-it-all, be a learn-it-all.” is a frequent Nadella quote. “In 2014, we cancelled our company meeting where our leaders would tell employees what was important, in favour of having a hackathon that lets our employees tell our leaders what’s important,” recalls Jeff Ramos, head of the Microsoft Garage, where employees with a bright idea can come and experiment, build, hack, and see if it has legs.

I took an immediate liking to Satya (people refer to him by his first name) who happens to the same age as me (ok, one month older).

When I watched him take to the stage at Microsoft Envision in Orlando last September, there was a real energy in the room. From him – a great beaming smile, an uplifting speech, an entirely positive demeanour – but also from his team too. He believes in a new business world – one where teams beat hierarchy, where collaboration beats competition, where humanity is always superior to technology, and where dreams outperform numbers.

And a few weeks later we got the validation. Microsoft became the world’s most valuable company again. Knocking Apple and Amazon off their top spots, and showing that old “dinosaurs” really can come back from the dead.

Here’s an extract from how The Telegraph reported the event moment last November when Microsoft soared above Apple and Amazon, to become the world’s #1 again:

“The 43-year-old software company, not long ago seen as a dinosaur of the tech industry, has in recent months overtaken its younger peers, Amazon and Google, in value.

This week, it went one better. On Monday, Microsoft leapfrogged its old rival Apple for the first time since 2010, making it the world’s most valuable public company for the first time in 16 years. Since then, the two have repeatedly traded the top spot. The moment caps an extraordinary comeback for a company that many were prepared to consign to history.

Not many companies have second chances, especially one that had become as monolithic as Microsoft. In early 2009, when its share price was at its lowest point this century, the company was reeling from the disastrous launch of Windows Vista, the long-awaited but bug-riddled successor to its wildly successful predecessor Windows XP.

The Zune, its supposed iPod-killer, had become a bad joke. Internet Explorer’s dominance over the web was being gradually chipped away by a not-for-profit browser called Firefox and the newly-released Google Chrome. In the first quarter of the year, Microsoft’s revenues fell, for the first time in its 23 years as a public company.

And while it had spent its time trying to fix its numerous problems, including a long-running antitrust battle with the European Commission, Apple had launched the product that would change the computing world for good. The iPhone, released in 2007, caught Microsoft flat-footed. Steve Ballmer, Microsoft’s chief executive, famously laughed it off at the time, saying it would never seize more than 4pc of the market.

Ballmer, who had taken charge of Microsoft from Bill Gates in 2000, could not have been more wrong, a fact that was made abundantly clear when, in 2010, Apple’s value surpassed that of its old rival. Even the death of Steve Jobs, who in earlier years had enjoyed nothing more than taking a pop at Bill Gates, did not slow Apple down, and a year later it became the world’s most valuable company, surpassing the oil giant Exxon Mobil.

Meanwhile, Microsoft was horribly weighed down by internal bureaucracy and infighting. At times, the company seemed more at war with itself than with its competitors. Little wonder, then, that it missed the three great consumer waves of the 21st century: search engines, social networking and smartphones. Its lack of direction was exemplified by the €5.4bn purchase of Nokia’s mobile phone division in 2013, a move that came far too late to work, if it ever could have. At the time, it seemed more likely that Microsoft would go the way of IBM and HP: a company that, albeit still valuable, had its best days behind it.

But in 2019, Microsoft’s floundering looks like a blessing in disguise, as the markets it missed out on suddenly look less valuable.

The smartphone market remains highly profitable, but sales are falling in what analysts have termed a “recession”. The digital advertising market that powers Google is showing some signs of running out of puff. And the less said about social networks these days, the better. (Microsoft’s own foray into the space, its $26bn acquisition of LinkedIn two years ago, has largely avoided the storm that Facebook and Twitter have been battling).

One could argue that had Microsoft been in any way successful in any of these areas it would be in worse shape right now. But by the time Satya Nadella replaced Ballmer in 2014, it knew it had to try move on.

Under Nadella, Microsoft has not exactly abandoned the everyday consumer, but neither are they a priority. The company’s attention is largely focused on getting businesses to adopt its corporate offerings – its Office software such as Word, Outlook and Excel – and its computer server business.

But its most notable success has been the cloud computing division Azure, a business that few outside the tech industry have heard of. Companies using Azure gain access to Microsoft’s data centres, which allow them to run applications and host services without having to buy their own hardware. It is not as glamorous a business as smartphones, but it is growing much faster: Azure revenues increased by 76pc in Microsoft’s most-recent quarter.

Meanwhile, a series of other bets appear to be paying off. HoloLens, the company’s augmented reality headset, has hardly become the mass-market product that Microsoft might have hoped when it was first announced almost four years ago, but on Wednesday the company revealed it had won a $480m contract to supply them to the US military. Other businesses, such as its Surface tablets and Xbox gaming console, have been reinvented in recent years, leading to healthy growth.

For years, it looked as if Microsoft was losing in the areas of the tech industry that really mattered. What investors did not see at the time is that its time in the wilderness allowed it to reinvent itself. As the rest of the industry struggles with a stock market crash, fears over fake news and the threat of internet regulation, Microsoft’s past failures have paved the way for the company’s renaissance.