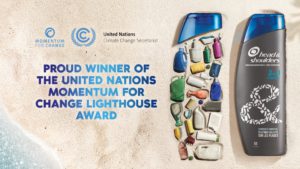 “We are working on reinventing brand building as we know it. The world is in a state of massive disruption—changing consumers, use of data and digital technology, development in AI, just to name a few. So, the best way to handle these disruptive forces is to lead disruption. That’s why we’re rethinking media, advertising, our agency partners, and our roles as marketers. We are reimagining and re-engineering across the entire marketing ecosystem to lead the way into the future, because in many ways, it’s already here.”

P&G’s Chief Brand Officer Marc Pritchard recently described a huge range of ways in which the world’s biggest consumer goods company is boldly embracing sustainability to transform its operations, rethink its brands, drive innovation, form new partnerships, make a positive impact across its footprint, and lead by example in its drive to be “a force for a good and a force for growth.”

“What if P&G products were made in a way that recycles waste, water, and energy?” he pondered, before adding “Actually, We’re already doing it, with 85% of our production plants sending zero manufacturing waste to landfill and finding uses for 5 million tons of trash.”

He argued that business paradigms must evolve in order to put people and the planet first. That means thinking differently about growth – growing the market vs. focusing on market share – and brands.

As part of its new Ambition 2030 sustainability plan, P&G has pledged to make all its packaging fully recyclable or reusable by that year. It also plans to power its manufacturing facilities with 100% renewable energy by 2030, and send none (as in zero percent) of its consumer and manufacturing waste to landfills—all part of the ambitious goals that it details in its latest corporate sustainability report.

P&G is advancing sustainability through learning from and working with partners, such as participating in #BrandsForGood, a new coalition committed to unleashing the advertising power of brands to make sustainable lifestyles desirable among consumers. It’s a significant commitment by the world’s biggest advertiser, which spends more than $7 billion annually to drive more than $65 billion in sales.

The new vision has spurred innovations such as the world’s first recyclable shampoo bottle made from ocean or beach plastic, as P&G introduced with its Head & Shoulders brand and has extended to its Herbal Essences shampoo and its Fairy dish detergent brands.

The Ambition 2030 new sustainability frameworkincludes two specific packaging goals: that 100% of packaging will be recyclable or reusable and that it will find solutions so that no P&G packaging will find its way to the world’s oceans. At the local level, that includes converting 25% of its shampoo bottles in Europe to post-consumer recycled plastic, a move that could prevent 2,600 tons of plastic annually (equivalent to 17 blue whales) from becoming ocean waste.

P&G is also launching new products or updating existing products with plant-based ingredients, such as Gain Botanicals and Downy Nature Blends. In another proof point that it’s making a difference, its Tide Purclean laundry detergent was named 2018 product of the year by Environmental Leader for being plant-based, dye-free and made from 100% renewable energy while being “just as powerful as regular Tide.”