Inside HENRi … Nestle’s global hunt for big ideas, named after the pharmacist founder who invented a baby formula. 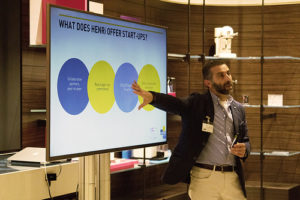 Nestle is the largest food and beverage producer in the world: from Nespresso to Häagen-Dazs to Pellegrino to DiGiorno to Toll House to Purina (if you’re a dog or cat.) 29 of Nestlé’s brands have sales that top $1 billion annually.

But the Swiss company has experienced a slowdown in its sales growth, at the same time as it tries to transform itself from a company best known for sweet treats—like KitKat bars—into a business more focused on nutrition and wellness. In 2017, Nestlé paid $2.3 billion to acquire Atrium Innovations, a Canadian producer of nutritional supplements like Omega-3 fish oil and organic multivitamins.

A key part of that pivot—and of making Nestlé more open to great outside ideas—is its HENRi initiative, launched in July 2016. The launch marked the company’s 150th year in business, and the initiative was named after Henri Nestlé, a pharmacist who started the company in 1867 after inventing a baby formula.

“HENRi is all about taking on projects that matter,” explains Gerardo Mazzeo, Global Innovation Director at Nestlé. “That’s the way we want to differentiate HENRi from other open innovation systems that already exist out there. It’s about creating a healthier future for consumers and families, and contributing to more of a sustainable future. It links beautifully with the core of what Nestlé is all about.”

And HENRi was set up with a clear mechanism for funding an initial pilot test with one of Nestlé’s 8,500 brands.

Mazzeo, who took on his role in 2012, recently explained how HENRi is structured, and how he spreads the word inside and outside of Nestlé.

“What we say is that HENRi is a bit like a matchmaker, where creativity meets scale,” Mazzeo says. “We’re looking to bring together the ingenuity of startups—their creative spirit, the passion for what they do—with the scale, geographic reach, and breadth that Nestlé can provide, in terms of marketing, R&D, or mentorship.”

A first set of innovation “challenges” launched in 2016 focused on forging collaborations between Nestlé brands and startups working in fields like mobile apps, augmented reality, and data analytics. One example: working with Boston startup Crowdly to help the Nestlé Purina pet food division understand who its most influential social media followers are, and improve word-of-mouth marketing.

More recent challenges posted to the HENRi site deal with topics like encouraging kids to exercise; diagnosing micronutrient deficiencies; or helping support a new class of “agripreneuers”—next-generation farmers—around the world.

“We’re very demanding of the quality of the challenge that goes onto HENRi,” Mazzeo says. “It really is about purposeful innovation. It has to be linked to our core purpose and values, and how we’re going to enhance the quality of our consumers’ lives. I’m not after short-term tactical projects. Those we can do internally, with our existing networks and agency partners.”

The HENRi platform itself was designed, built, and launched in about five months, Mazzeo says. “The back end already existed—there was already an existing platform internally within digital services and global IT—so we were able to just focus on the front end, design, look and feel, registration, and data collection. That made the launch less costly.” Mazzeo describes the initial project as “a lean startup—it was ‘me, myself, and I’ from Nestlé, along with an agency team of two or three people.”

Mazzeo, who reports to Nestlé’s Global Head of Marketing and Consumer Communication, says he is the only person who works on HENRi full-time. But he adds that a handful of others in the company, and at the advertising agency McCann, provide support “when their subject matter expertise is needed.”

For each challenge posted to the HENRi site, there is already an internal brand sponsor at Nestlé, and $50,000 in funding allocated to get a pilot test underway. “The challenge and funding needs to be signed off by a senior executive in [a specific Nestlé] business,” Mazzeo says. And the funding, while small, helps “to lubricate the beginning of that partner-pilot proof of concept phase. It shows true commitment that they’re deadly serious about this particular challenge.”

Mazzeo views one of his roles as an editor or curator of challenges. He says being selective is crucial.

“I’d rather have disappointed internal people than have the dilution of having lots of challenges on the HENRi website,” he says. “Fewer challenges of higher quality is better.”

Sourcing those challenges requires lots of internal legwork. “Getting the traction, getting the awareness, getting the amplification—we’ve learned to do that in a much more creative way since we started,” Mazzeo says. “Any initiative that comes out of the global headquarters is always going to be met with some resistance.” But getting a first wave of “good quality challenges,” he says, really helped to “wake people up to the idea that, if we engage with HENRi, they can really have impact.”

And participating in many business unit committee meetings, he adds, is part of what it takes to build support for something new in a large organization. “I’ve had to spend a lot of time internally with our different strategic business units, presenting HENRi—what we’re doing, how they can get involved.”

But Mazzeo says he emphasizes that his team will handle much of the heavy lifting of running a challenge. He explained that business unit leaders will only help define the challenge itself, along with the selection criteria, or “filter” that will help to weed out irrelevant startups. Once five startups have been chosen, the business unit leader will listen to pitches from five different companies—either in person or via Skype. Following the pitch session, “the business owner will select a startup that they best feel meets their challenge,” Mazzeo says.

To make it more appealing for startups to work on projects with Nestlé—and limit frustration on both sides of the equation—Mazzeo says it’s important to reduce the number of steps and the pages of paperwork required to run a pilot test.

Mazzeo has representatives of legal, procurement, and finance who work closely with his team, and, he explains, “We have significantly reduced our NDA [non-disclosure agreement] and scope-of-work documents to two pages. I said [to colleagues in the legal department], ‘How can we make the process easier and simpler for startups?’ I asked a controller, ‘Who is the best person I should speak to in order to help our brand teams when it comes to payment terms? How can we turn this thing upside-down to get payment terms down to the absolute minimum?’”

Even after more than a year of running HENRi, Mazzeo says he is “learning every single day about how to best manage our peer-to-peer relationship with startups.”

Just as speedy payment is important, so is a speedy decision about whether Nestlé is interested in a partnership. “Startups want to hear the word yes, but if you tell them no, they can move on,” Mazzeo adds. “The word we don’t want to use is ‘maybe.’”

“Startups are not suppliers,” he continues. “They are our future partners on the challenges. Within 24 hours, we’ll get back to every startup and every inquiry so we do not keep them waiting.”

One of the key learnings from getting HENRi up and running, Mazzeo says, is that the best startups don’t just flock to a big company because it has unveiled a new website. “Amplification and awareness” are essential, Mazzeo explains.

“We didn’t realize how impactful being on a panel would be, or being a keynote speaker, or having a booth at a trade show where we talk about HENRi,” he says. “You meet people with similar shared ambitions to what you want to do at a global level; you meet partners that want to work with you. The event schedule has been really important. We go to food and beverage events; we went to an agritech event where I was on a panel. Establishing thought leadership at the events is really important.” In recent years, that has included events like the Festival of Marketing in London, ad:tech, and a New York City panel discussion on “The Future of Food, and Who Will Feed Us.”

If a startup wants to engage with Nestlé, but doesn’t have an offering that is relevant to a specific challenge, it can still register on the platform. “When we have appropriate challenges, we will contact them directly,” Mazzeo says. “We’re opening ourselves up for business.” HENRi is intended to be, in Mazzeo’s words, “the entry point for global startups” that want to collaborate with Nestlé.

As a result, Mazzeo says, “our database of great startups is improving. We had over 160 applications to the first six challenges, and three of those [pilots] are now in field.” In total, he adds that nine projects have come through the HENRi matchmaking process and are either being piloted, or heading toward a pilot test.

The next phase for HENRi may involve running challenges specific to Asia, South America, and other non-English speaking regions. And in 2018, Mazzeo says his team will be “ramping up the event schedule” to promote HENRi to startups around the world. And he’s also continuing to meet with colleagues at Nestlé, “playing Sherlock Holmes,” as he puts it, “and finding more great challenges to run.”

One thing is definitively not on the roadmap for HENRi’s future, according to Mazzeo. “From the very beginning, we were clear that HENRi will never become an idea suggestion box” for collecting ideas from Nestlé’s 330,000 employees. “They never work,” he clarifies. “You don’t open yourself up to the outside world, and it doesn’t link to strategy.”

Mazzeo says he’s gratified to see that Nestlé’s CEO, Mark Schneider, has been touting the company’s new emphasis on open innovation in recent talks. But Mazzeo says he knows that, before long, the collaborations that HENRi is spawning will need to deliver tangible returns to the company.

“My CMO is soon going to be asking, ‘Show me the impact, show me the rate of return—which are very valid KPIs,’” Mazzeo says. “But the learning and the collaboration have been incredible. And the fact that an organization of our size and complexity can do this—we’re Swiss, we can be risk-averse and conservative—I think it shows that the culture of experimentation is beginning to build.”

The Future of Bottled Water:

“The PET plastic that we use for the majority of our packaging today is the best solution, but it’s not without challenges. Conventional plastic is not seen as a credible biodegradable material, as it requires fossil fuels and recycling rates are still far from being what they need to be.

Meanwhile, carton-based packaging is not a viable alternative as consumers want to be able to see the water through the packaging. But there are innovations in packaging and delivery systems that we might not yet have considered or tested. That’s why we want to work with the right partner to scout for new, complementary alternatives and to find new, additional ways to make tasty, quality drinking water available to our consumers.

We’ll source and test solutions that companies of all sizes (from start-ups to established groups) might have already in the market or plan to launch—for mineral water, spring water and purified water. The chosen solution will need to be see-through, allow for branding, protect water quality and not require any municipal works (such as hundreds of kilometers of new pipework). It also needs to be credible in the eyes of eco-conscious consumers if we’re going to make a genuine difference to how we access water. This is a long-term challenge. The sooner it is met the better. Once we have selected the most promising solutions, we’ll pilot them and afterwards look to roll them out to the wider Nestlé Waters organization.”