German innovation … from industrial precision to punk entrepreneurship … is Germany ready to change its game? 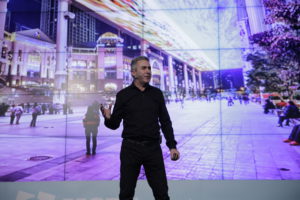 Whilst German industry is packed full of industrial giants – BASF to Bayer, BMW to Bosch – Germany is now also becoming a nation of entrepreneurs, harnessing the academic excellence and commercial infrastructures to create a new generation of business.

The problem with success.

Germany has been so successful in industrial engineering and production, that is has perversely been quite difficult to look beyond product and process for new types of innovation. The academic discipline and rigorous application of proven methodologies has even stifled the free-thinking (more imaginative, more intuitive, more irreverent thinking) that is so common to many of the world’s innovation hotspots.

Having lived and studied in southern Germany (I studied high temperature superconductivity physics at the Albert Ludwig Universitat in Freiburg im Breisgau), I became acutely aware of this “engineer” mindset. Whilst I hate stereotypes, there is something in the German psyche, that seeks logic and precision, detail and structure.

Having spent the last 30 years working across the world with many different companies, including German brands (including Allianz, Bosch, Henkel, Lufthansa, T-Mobile and Volkswagen), I notice a difference to other countries in both West and East. Most business people seek academic doctorates for example, and continuous professional development is rare. Most German businesses are family owned, with strong influence from owners and also from unions. Most businesses are incredibly product-centric, with a services and service culture slow to take hold.

Of course German businesses have been incredibly successful – they have been the engine of European growth for the last 50 years. But their innovation has largely been incremental – making existing business, products and processes, better.

Prof Khairy Tourk, of the Stuart School of Business in Chicago, says that Germany’s strong position in fields such as automotive engineering, chemicals and factory machines has given the country a “resilience” in the face of economic adversity that made it stand out compared with other countries such as the USA and United Kingdom.

“Germany has performed brilliantly when it comes to adding new ideas to products and processes in the kinds of sectors in which it has traditionally excelled,” says Marco Annuziata, GE’s chief economist. “If you look at a BMW car you will find it packed full of the kind of incremental innovation that the Germans are good at and which gives the country a reasonable amount of self-confidence for the future” adds Tourk.

Therefore this is certainly not a criticism. But it does provoke a question, about how this approach to innovation will be sufficient in a world of more dramatic changes.

Like any successful business, it is hard to let go of the model that made you successful, and tempting to keep squeezing more out of what has worked before. However the success models of the past are unlikely to create future success.

What’s the challenge for German innovation?

Do German businesses have the imagination to adapt to a changing world?

Where factories are displaced by 3D printers, where robots and AI can replicate the know-how of a highly skilled worker, and where emerging markets can replicate the quality of production at much lower costs … can German leaders develop new ideas, alternative strategies and business models, innovative products and services, to compete in this new world?

In fact, walk around the streets of Berlin, for example, and you will see a start-up culture every bit as vibrant as Silicon Valley, Stockholm or Shanghai. The youth culture, the irreverence and collaboration, of “hippy” Berlin is actually driving a new mindset in business. Gone are the suits who only see process diagrams and quality assurance, in come the punks (ok, millennials, hipsters, creatives) who have passion and vision to disrupt the status quo.

Large organisations are desperate to innovate differently too. Daimler set up a completely separate team to drive its Car2Go project, whilst Bosch is collaborating with Nvidia, the brains behind most autonomous cars. Whilst some business leaders struggle to grasp the new world, others are embracing it rapidly. Design thinking, for example has become one of the most sought-after business disciplines, because its more intuitive approach is so needed. Similarly Business Model Innovation, has given the technocrats a new context for their structural thinking.

How to develop more innovative leaders?

“Gamechangers Germany” is an executive program that I have developed in partnership with GERBUS, the German Business Academy. It is based on my recent bestselling book Gamechangers which is available in German, but goes much further in focusing on the practical issues and opportunities for small to large (and particularly mid-size) businesses in Germany right now. It provides an accelerated learning platform for business leaders to explore, practice and apply these new approaches. Over 4 days (2 x 2 days of fast, intensive, inspiring learning), we bring together both the inspirational ideas and practical techniques to apply to your own business, and to drive innovation and growth in this new world. 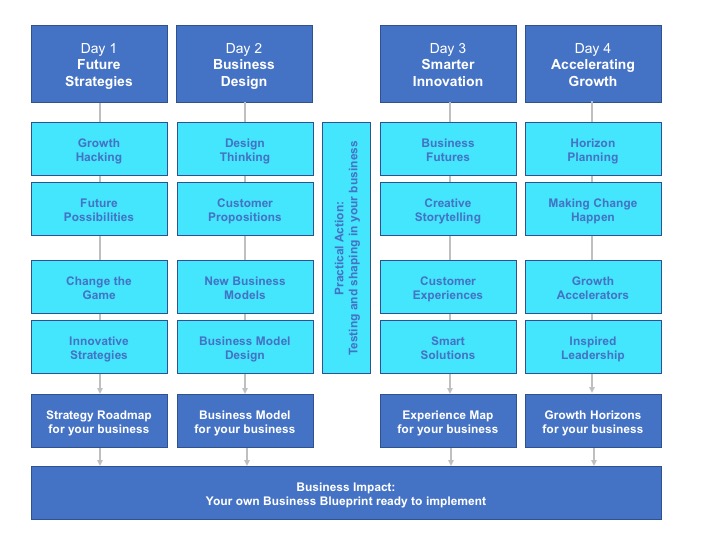 Specifically for business leaders, the executive program sets the new strategic context for businesses, learning from today’s fastest-growing, most-innovative businesses. We explore “game changing” strategies for challenging existing markets and mindsets, and how to make the right choices in fast and uncertain times. Each participant develops a new “strategy roadmap” for their business that is driven by the best new opportunities for you to innovate and grow.

We combine this with design thinking to embrace new customer insight, to innovate new business model, built around new customer propositions. We then bring together the new toolkit of lean and agile disciplines to drive implementation, and sustain growth. Most significantly, we explore the changing role of leaders – how you need to be the leader of change, but may also need to change yourself, to be effective. The outcome is a “business blueprint” ready for you to implement.

There are still a small number of places available on this exclusive program for business leaders. If you would like to attend, or discuss how we can create a customised in-company version at your own company, then contact Henrik Lauridsen for more details: hl@gerbus-academy.com

Who are Germany’s most disruptive innovators?

As inspiration to get you started here are some of the early nominations. Are they Germany’s most disruptive innovators, or do you know better? What can you learn from these companies, which you could apply your own business?

Blinkist … information in a blink

Sebastian Klein and his friends found it hard to continue learning after leaving university. In 2012, they launched Blinkist, an app that summarises non-fiction books in 15 minute “blinks” that can be consumed in audio or video formats.  More than 1,500 books in 16 categories are available for the platform’s one million users, from corporate culture to parenting.

Car2Go … the smarter way to drive

The Daimler subsidiary provides carsharing services in European and North American cities, exclusively using Smart and Mercedes Benz vehicles, and features one-way point-to-point rentals. Users are charged by the minute, with hourly and daily rates available. The service forgoes the typical centralized rental office, and cars are user-accessed wherever parked via a downloadable smartphone app. As of October 2016, it is the largest carsharing company in the world with over 2,000,000 members.

CureVac is a biopharma company headquartered in Tubingen that develops therapies based on messenger RNA (mRNA). The main research primarily focuses on cancer immunotherapies and prophylactic vaccines against infectious diseases. Founded in 2000, it currently has about 240 employees. The basic principle of the company’s proprietary technology is the use of mRNA as a data carrier to instruct the human body to produce its own proteins capable of fighting a wide range of diseases.

Delivery Hero … from restaurant to home

Delivery Hero seeks to be the world’s leading online food ordering platform. Niclas Östberg and colleagues started the business in Berlin in 2011, and the company operates in 53 countries internationally in Europe, Asia, Latin America and the Middle East and partners with 300,000 restaurants. Users can find local restaurants, filter by cuisine, browse menus, read reviews and other information like the restaurant operating times and order takeaway food online. In the UK it uses the brand name Hungry House.

ElektroCouture … the next thing in smart fashion

Lisa Lang, a former engineer, couldn’t find clothes to “express her nerdiness”, she says. In 2014, she founded and fully financed her own fashion technology house, focusing on light wearables. ElektroCouture sells LED jewellery and clothes that glow in the dark – including a jacket that changes colour based on texts it receives. Lang has produced clothing for Lufthansa, IBM and Intel and sells her collection on ASOS and Amazon.

Fidor Bank is a German digital bank founded in 2009 in an effort to re-establish lost confidence in banking with new and customer-focused services, enabling its customers to actively participate in the bank’s decision-making processes. The experiments in transparency including novel business models such as linked Facebook Likes to interest rates. In Germany Fidor currently has around 100,000 clients, and in line with the motto “Banking with Friends”, more than 300,000 community members.

HelloFresh offers meal-kits including ingredients sourced from local suppliers and step-by-step recipes created on a weekly basis by their in-house culinary teams. The company delivers over 7.4 million meals a month to over 800,000 regular subscribers across the world. All countries offer omnivore (Classic Box) and vegetarian (Veggie Box) box options. Celebrity chef Jamie Oliver creates recipes for HelloFresh, whilst a partnership with Vorwerk and their multi-function kitchen appliance Thermomix was launched in Germany and Austria. HelloFresh delivers custom recipes made for cooking with a Thermomix machine.

In 2010, Naren Shaam visited 14 European countries and got frustrated with rail and coach companies not allowing multimodal bookings. “There was no way of knowing what was the fastest or the cheapest way,” says Shaam, 33. So, in 2012, he launched GoEuro, a continent-wide service offering all modes of travel. It now covers 32,000 rail and bus stations and 207 airports in 12 European countries.

Grohe is the world’s leading provider of sanitary fittings and a global brand, dedicated to providing innovative water products. For many decades, Grohe has been committed to the brand values of technology, quality, design and sustainability that all illustrate Grohe’s commitment to creating exceptional experiences and to delivering “Pure Freude an Wasser”. Based in Dusseldorf, since 2014 Grohe has been a member of the Japanese Lixil Group.

Number26 … the bank that wants to be different

Berlin-based startup Number26 (or now simply, N26) is trying to reinvent the bank. This might sound crazy, and that’s why the startup has processed step by step. After partnering with Wirecard for the banking back end, attracting 200,000 users  the company now has a full license to operate in Europe. “At N26, we obsess every day about great product design and blazing-fast technology. Our goal is always to make banking easy, intuitive, fast, and maybe even a little fun for you along the way.”

Zalando is a European online retailer based in Berlin. The company’s cross-platform online store that sells shoes, clothing and other fashion items. The company was founded in Germany in 2008, and since has begun operating in fourteen European countries and worldwide with spin-offs and subsidiary companies. Zalando was created in 2008 by Rocket Internet (the start-up incubator behind many of Germany’s entrepreneurial brands), Robert Gentz and David Schneider, initially under the name Ifansho. Inspired by US online retailer Zappos, Zalando initially specialised in the sale of footwear before diversifying.

It’s time for you to change the game!