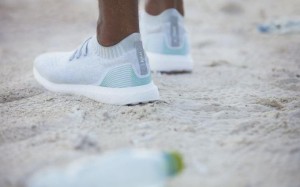 Adidas is helping to clean up the Earth’s oceans by using the waste floating around the world to make shoes.  The sportswear company has teamed up with Parley for the Oceans, an environmental group that raises awareness of pollution in the ocean, to produce pairs of trainers made from recycled ocean waste.

While only  7,000 pairs of the UltraBOOST Uncaged Parley will be made initially, the company says it plans to make more. “We will make one million pairs of shoes using Parley Ocean Plastic in 2017, and our ultimate ambition is to eliminate virgin plastic from our supply chain,” Eric Liedtke, an Adidas executive.

Priced at €200, the shoes, which contain 11 plastic bottles, will be available in Adidas stores and from the company’s website in mid-November.  The upper part of the shoe is made from 5 per cent recycled polyester and 95 per cent waste plastic taken from the waters around the Maldives, while recycled material was also used to make most of the rest of the trainer, including the heel, lining, and laces. As well as the Parley trainers, the company is also using recycled ocean waste to make limited edition football kits for Bayern Munich and Real Madrid.

“Nobody can save the oceans alone. Each of us can play a role in the solution,” Cyrill Gutsch, the founder of Parley for the Oceans, told the Verge.  “It’s in the hands of the creative industries to reinvent faulty materials, products, and business models. The consumer can boost the demand for change.”

Plastic floating in the world’s oceans has become an increasing problem in recent years.  A major report in January said oceans would contain more plastic than fish by 2050 unless the world took radical action to stop rubbish leaking into the seas.

At least eight million tonnes of plastic ends up in the ocean each year, the equivalent of a rubbish truck of waste every minute, according to the report from the World Economic Forum. The rate of plastic pollution is only expected to increase as more and more plastic is used globally, especially in emerging economies with weaker waste and recycling regimes.